We can begin with the picture of the empty Expo stand.

The term “mayhem” may sound too rough, but that’s what at least Saturday was for me. On top of just being busy, posing on pictures and talking with people, I had a blast! The Ski Expo weekend is a yearly and a busy of a weekend, but I still love it. It’s the beginning of every season, and thus, all the people you meet, are skiers or riders. It’s awesome. The Citröen, FightBack c3 car was publicly visible for the 1st time. I love it.

I came to Helsinki already last Thursday, to get everything ready for the Expo, and for a Hifk-Pelicans ice-hockey match, of which I don’t have any good photos. But I came already Thursday, cause it was nicer to be in the right city on Friday morning and anyways… since the Scandic hotels accommodates me kindly anytime, it would’ve been a waste to come later.

On Friday, I was ready for action! We had the FightBack’s stand on the boarder of Ski and Board Expos again, and even though Friday wasn’t a busy day, it was quite busy. I gave a speech at the Snow Stage every day, but Friday’s speech was my least favorite one, so I won’t talk about it now. Here I must mention the help of my mother and lil’ bro Veikko’s. They came on Friday afternoon and stuck around for the whole weekend, thanks! Our-, Team FightBack’s stand at the Ski Expo 2014. Veikko holding it down! This is from Friday. I was honored by the visit of the one and only Jontte HC Kuoksa.

Saturday was really crazy. The Expo is always very busy on Saturdays. I gave a presentation of my last year again, the year which was kind of a busier one… since it was about a year ago, when my FightBack was really made public. You may find a great amount of pictures from Saturday, on which I’m posing at… Now I must talk about Saturday night, which brings us to Nipwitz Brain Massage world premiere! 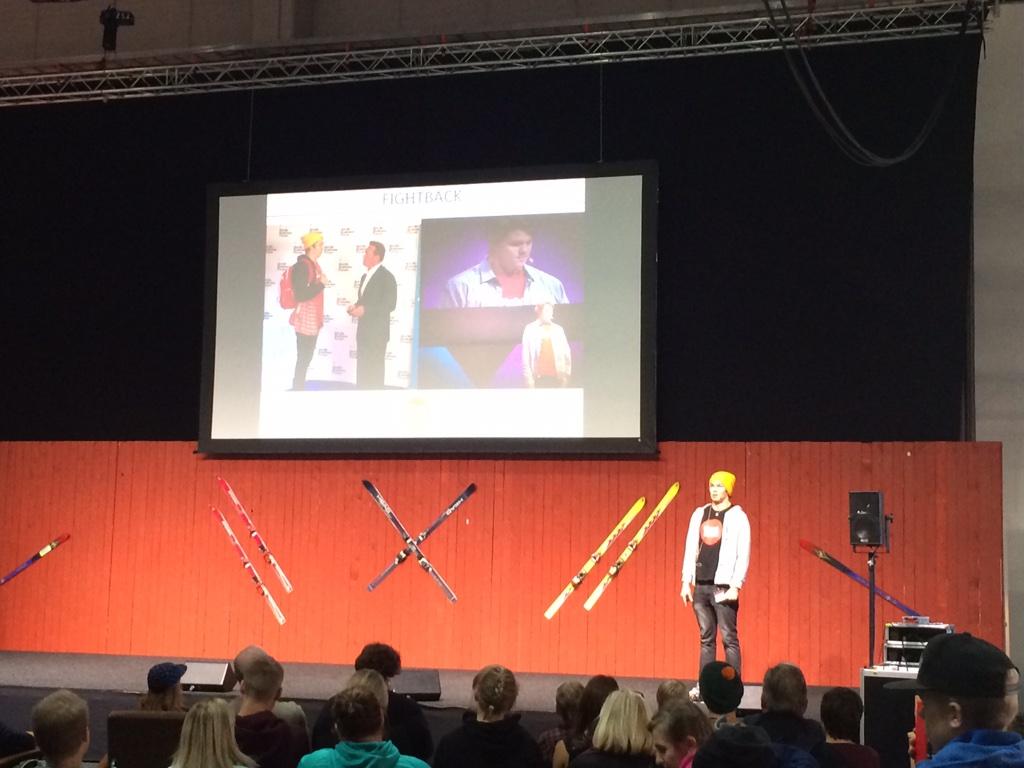 Of that simply awesome premiere, I can’t say much. Because nothing I’d say, could portray it high enough. I watched the short movie and went speechless. I loved it. The guys had put so much effort to this. They are all my very good friends and I love them. This was an end of an era. No more Nipwitz episodes. We had serious and very friendly talks with every one the skiers. It was a night I will never forget. Especially Carl-Michael went under my skin, with his wise words. The skiers on stage, in the premiere of the first-, and the last ever Nipwitz movie, Brain Massage!

On Sunday, the Expo -ing wasn’t so crazy. It was very active, there were a lot of people, but definitely tolerable.  Which of course means that, I needed to go and make things interesting! I couldn’t do that myself, so one of the Team FightBack’s chiefs, Jerppa, had to step in. We went to watch a basketball match, the Helsinki Seagulls vs. Loimaa Bisons at Helsingin Jäähalli (an ice-hockey arena). It was a great game, we (Gulls) won the Bisons and I met so many stars! Basketball, music, TV and you name it… I found Adam Tensta from the game. I gave Adam a bright beanie – FightBack! Signmark rocking the crowd via Adam.

The first star I met, was one of my all-time favorite artists, Adam Tensta. It was really great to see, that no one could’ve taken off his cool… The other really important person I met at first, was Signmark, the deaf rapper. A real Fighter. Then I met the two of Finland’s most famous artists, Cheek and Isac Elliot. Both really busy, of course, but they both seemed to be really nice guys. With Isac I even hanged around for a while and he seemed to be a really nice of a young fella, who just happens to have a golden voice. I met Cheek, and put up a thumb. I met also Isac Elliot and my man, Särre!

To the game, Gulls took Bisons down with 85-64, 20 points! The MVP of the game was the young Carl Lindblom, who scored over 20 points. I like that youngster. I see great success in his future. In my own future, I see busy times! I’m sitting on train now, but I’ll write to you ASAP again. Gulls vs. Bisons. Gulls won! 😛 I am stoked for them.